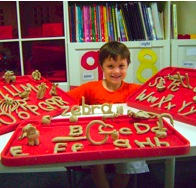 I had been sending my daughter to various therapies , but progress was minimal.

It's been about a year and 9 months since i tried one more therapy , AIT with Focus learning as well as reflex exercises and I have seen a considerably large improvement in my daughter's motor skills . I'm more than pleased with the results which i have seen for my own eyes and can only thank you , June Webb , so much for her improvement .

I believe that the reflex exercises have have really changed my daughter's life as her motor skills have improved . How pleased i am with my daughter's progress or how thankful for this programme with really helped my daughter cannot be expressed with words .

I cannot express my heartfelt gratitude for all that has been done for my daughter and im really thankful for June Webb who changed my daughter's life .

Mr You and Fanny

Yours was another door we knocked on and we are so happy we did as it has changed our lives and more importantly our children's in a very positive way. Some changes were immediate but, as expected, the bigger changes occurred over time.

Michael is in his final year of school and we are very proud of his confidence and focus on succeeding previously this seemed impossible for him. The changes in Felicia have been no less remarkable, academically Felicia has always struggled but not anymore, she still works very hard but is now achieving results in line with her efforts.

...Towards the end of the AIT…we began to notice that she was playing better with friends. There was more variety in her play, having more ideas and much more experimental with the toys that she already had. Her toys used to sit on the shelf until she was prompted to play with them. Now she was taking initiative on her own. She also was playing better with her sister and even able to choreograph a tap dance routine.

We were also surprised at how she described her mind previously being "blocked", like a "door was blocking her brain" and that she couldn't think. And that now she was able to think clearly and quickly…

She has come home from school without meltdowns and quite happy! She says that she is less irritated by everything. Although sounds seem louder than before, she feels less insecure about them and generally does not panic…

What we offer | How we work | Testimonials | Fees